As the most basic skill of NFC tag, tag information acquisition and interaction is more convenient and fast than QR code. The advertising labels on the billboards are now in vogue. NFC Advertise have attracted more and more attention from advertisers because of their novel interactive ways.

Clear channel promotes NFC through billboards in the UK

All consumers participating in this activity need to use NFC mobile phone to read the area designated by the robot on the billboard with NFC label, obtain and answer three popular science questions, and have the opportunity to participate in the draw with a prize of 1000 pounds.

Matthew Dearden, CEO of clear channel UK, said that the human vs machine activity was very interesting and provided free label interaction for consumers, while NFC labels have been deployed in thousands of bus stops in the UK, which can better cultivate people’s habit of reading NFC labels. 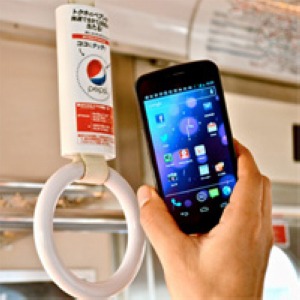 These advertisements appear in the pull rings and window stickers of the subway. Each place is equipped with two NFC labels. Passengers can use NFC mobile phones to touch the labels to participate in the activities to win prizes.

The traffic information station boards of 50 public transportation smart cities post in the main urban area of Lanzhou City, China have been put into use.

The new electronic bus stop has the functions of interactive data query of traffic information, LCD information release and display, voice broadcast of vehicles entering the station, etc. It is worth noting that these electronic stop signs have NFC functions, and can interact with NFC mobile phones to obtain surrounding information, bus stop information, etc.