Today, president Trump once again filed a lawsuit against the authenticity of the mailed ballots in the US general election. In fact, the use of RFID technology can completely guarantee the authenticity, safety and reliability of votes. In the mean while many state took actions already.

For example: Alameda County developed a Radio Frequency Identification system to improve the “Chain of Custody” for voting equipment and speed up the collection of election results.

After Alameda County’s 810 polling places close on Election Day, delivering the voting equipment quickly to the County’s vote count facility in downtown Oakland requires an efficient, secure, tightly-run process. Volunteers must collect three critical pieces of equipment – a memory pack holding vote results scanned from paper ballots; a paper roster index of every person who voted at that polling place; and a PC Memory card containing votes from a touch screen voting machine that is made available for handicapped voters. This equipment must be placed into a tamper-proof canvas bag, sealed, and delivered to one of the County’s 27 intermediate return centers.

Historically, the 810 bags were collected at the Return Centers and subsequently delivered to the central vote count facility in Oakland. As bags arrived simultaneously, a barcode system was used to scan each piece of voting equipment into an asset tracking system. Because the barcode process was labor intensive, bags stacked up, resulting in delays in the check in procedure. Missing equipment was often not discovered until after midnight. Election officials then had to dispatch a Sheriff’s deputy to find someone to open up the polling place building, look for the missing equipment, and take it back to the vote count facility. As a result, final election results could be delayed by several hours, stretching into the next business day. 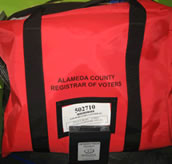 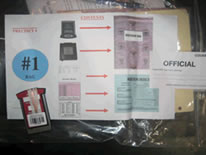 A voting roster, a paper index of who voted at that precinct that day

Photo of the red bag that contains the assets from the precinct.

A memory pack (about the size of an old 8 track tape), which holds the voting results that have been scanned from the paper ballots

The Alameda County Information Technology Department solved the problem by implementing the first Registrar of Voters Asset Tracking System in the Country to use Radio Frequency Identification or RFID. Rather than using an inefficient barcode wand to read each asset, an RFID reader can bounce a radio signal off an entire bag of assets at once and record the contents instantly in an asset tracking system. This is accomplished by attaching inexpensive RFID tags on all the ROV equipment that is tracked through the chain-of-custody on election night.

Alameda County worked with industry experts in the RFID technology, to help adapt the technology to meet the Registrar of Voter’s needs. The solution provides RFID tags for each piece of voting equipment and matches it to the physical ID tag on the outside of the canvas bags. County employees use handheld RFID scanners at each return center to instantly check the contents of each canvas bag. The RFID signal can travel through paper and fabric allowing the operator to capture the bag number and the contents of the bag without opening it. The handheld scanners know what assets belong to which bags and can confirm or reject the bag instantly. This allows the County employees to immediately address the issue of missing equipment while the poll worker is with them. If anything is missing, the poll worker is sent back to the polling location to collect the missing asset.

Photo shows the screen from the hand-held scanner.

The vote count facility in Downtown Oakland was equipped with RFID portal readers and a Smart Table. As vehicles delivering bags from the return centers converge on the central vote count facility, they are rapidly unloaded. The bags are walked through the RFID portal and immediately uploaded into the County’s ROV asset tracking system. These bags are carried up to four at a time and register instantly as staff carries them into the room.

Photo of the Smart Table.

Photo of the scanners on either side of doorway that scan bags as they are delivered.

The bags are passed to sorting stations that no longer have to worry about the manual barcode checking process. Memory cards are passed rapidly into the vote count room and processed.

Increased productivity is measured through the improved efficiency of the asset tracking system during an election, the improved security of the equipment handling, the improvement in chain-of-custody reporting and the early identification of missing assets.

On November 6, 2007 Alameda County held a preliminary election with 75 polling places using the RFID-based tracking system. The polls closed at 8 p.m. and by 8:40 p.m., the bags began to arrive at the return centers. Only two items were missing, flagged by the RFID readers, and were quickly located. When the bags reached the vote count facility, County employees were able to read and verify that all of the voting equipment was accounted for in less than 90 minutes (compared to four to five hours using bar codes). With that success and several other smaller trials, on February 5th, 2008 (Super Tuesday), all of Alameda County’s 800+ polling places and volunteers were armed with the RFID-enabled equipment and the process flowed without incident. With two more major elections in 2008, the ROV RFID asset tracking system is an essential component of the election tracking system at Alameda County.

Which Textile Assets Suit for Identify and Trace with RFID Textile Tag?
November 2, 2020
Go to Top